If you’re looking for a great summer read then look no further than the gorgeous new YA novel Under a Dancing Star by Laura Wood, published on 4th July by Scholastic.  A captivating coming-of-age story set in 1930s, it will sweep you into a glorious, romantic summer haze!

Under a Dancing Star by Laura Wood

In 1930s England, Bea’s parents want her married off to keep the family estate alive. but she longs for adventure. A golden summer in Italy with her bohemian Uncle opens up a whole new world, which includes Ben , a handsome, infuriating artist. Sparks fly between the quick-witted pair until one night, under the stars, a challenge is set – can they put aside their teasing and have the perfect summer romance? There is only one rule – they absolutely must not fall in love.

Beatrice Langton has never quite fulfilled her parents expectations of being a dutiful daughter – in fact far from it. Her fascination with nature and scientific discovery, her desire for exploration and freedom do not sit well with her parents plans for marrying her off to a rich husband, thereby saving the crumbling family estate and ancestral home of Langton Hall.  Exasperated with Beatrice’s behaviour, which in their eyes is not becoming to a young lady of 17 years, her parents think that sending her to stay with her Uncle in Italy for the summer will drum some sense into her – but they couldn’t be more wrong! For Beatrice’s Uncle, after the death of his wife, has take up with a flamboyant artist and they live a wonderfully bohemian life, with her young cousin Hero, offering an open house to artists from all over the world who want somewhere inspirational to work.  So Beatrice, or Bea as she is called by her young cousin, suddenly has a world of wonder opened up to her, set against the backdrop of the beautiful Italian countryside.

Beautifully described throughout, Under a Dancing Star, brings to life a whirlwind summer romance and is a wonderful exploration of first love.  The stifling world of British aristocracy contrasts with the exuberant world occupied by those who can live as they choose.  The looming clouds of war and references to fascism and the approaching peril invade the summer haze at times and bring a dose of reality. The price of freedom is often loss of some kind which we see in the wonderful cast of characters Bea meets including, Ben, whose mother died and who ran away from an orphanage as a young boy. But the heart of the novel is Bea’s self-discovery, her new found feelings of love which are as transformational as the butterflies she likes to study and the realisation that she can choose her future.  Under a Dancing Star really does make the perfect summer read!

Find out more at www.lauraclarewood.com and www.scholastic.co.uk. With thanks to Scholastic for sending me this book to review. 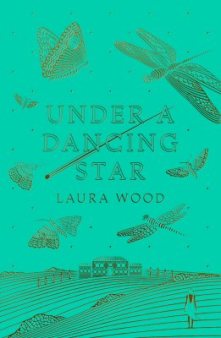